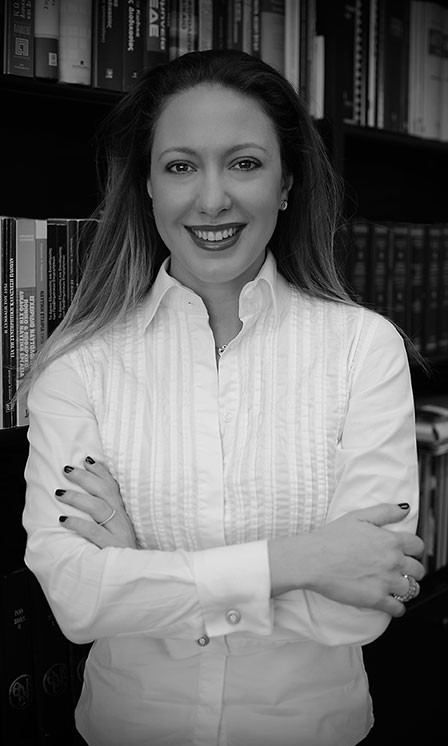 Nenia is a corporate and shipping lawyer [LL.B. (1st Class Honours), 2001 Aristotle University of Thessaloniki, Greece , LL.M. (Merit), 2002 L.S.E., UK] admitted to the Bar Association of Thessaloniki, Greece in 2004 with distinction, and fully qualified to act as a Greek lawyer. She is appointed to the Court of Cassation and is a Member of the Chartered Institute of Arbitrators.

She specializes in cross border-transactions, real estate, M & A and has a wide experience in foreign investment in Greece, corporate governance, strategic solutions & taxation. She also has great experience in cross-jurisdictional dispute resolution, arbitration and litigation in corporate, commercial and maritime cases.

Nenia specializes in shipping litigation with particular emphasis on admiralty claims and with considerable experience in collisions and groundings as well as on ship arrests. She is one of the few shipping lawyers specialising in both ‘wet’ and ‘dry’ work from collisions, salvage, total losses, fires and groundings through to cargo claims and charterparty disputes and claims arising under bills of lading.

Nenia also deals with cross-jurisdictional dispute resolution in corporate, commercial and maritime cases and has a wide experience in foreign investment in Greece, corporate strategic solutions & taxation and corporate real estate. She is very experienced in drafting corporate & commercial contracts and has in-depth knowledge of hoteling, hotel investment and management contracts to hotel and resort licensing & compliance.

Nenia is a key member of our Emergency Response team and an experienced litigator. She is praised by clients for her very user-friendly approach and for not over-complicating things with legal jargon. She is an experienced and energetic attorney-at-law and has received multiple appointments from P&I clubs, shipowners, liner companies, oil & bunker traders and freight forwarders as well as salvage & towage operators. She has also consulted multi-national companies and big scale international investors in Greece on various projects.

Nenia read law at the Aristotle University of Thessaloniki [LL.B. (1st Class Honours), 2001] and at the London School of Economics [LL.M. in Corporate & Commercial Law (Merit), 2002]. She was admitted to Thessaloniki Bar Association in 2004 with distinction and is appointed to the Court of Cassation. She is a Member of the Chartered Institute of Arbitrators (CIArb), BIMCO, the French Hellenic Chamber of Commerce (CCIFH) and the Hellenic Dutch Association of Commerce (HEDA) and she has attended numerous Annual General Meetings of the International Salvage Union (ISU) and the European Tugowners Association (ETA) and seats as a Member of the Committee on Arbitration of the Thessaloniki Bar Association which has recently published the new revised Thessaloniki Bar Arbitration Regulation.

She has advised a leading shipping group in towage and salvage on all shipping and corporate matters for more than a decade. During this post she also held the position of Insurance & Claims Manager with extensive experience in P&I and H&M policies and claims, incuding PA, GA and salvage claims.
She is the co-founder and managing partner of “Dikaion Law Lawyers & Consultants”.

She has also served as legal consultant of the Greek State Aid Unit of the Centre of International & European Economic Law.

Nenia can fluently work in Greek, English and French. She also speaks Spanish.